My thoughts on technology, aviation, and other geeky subjects.

In this tutorial, I’ll explain how to enable the 8-bit CPU to support more traditional programming with subroutines and assembly, dramatically increasing its capabilities. I go through adding a stack pointer and stack with 74LS193 counters, interfacing with an Arduino to stand up an assembly toolchain, and add more control lines by using 74LS138 decoders instead of more ROMs. As a bonus, I also enable B register output and add a Schmitt trigger to clean up the clock signal.

This is the second part of a two-part series. You’ll need to have done the work in part one where I expanded the RAM and make it a full 8-bit CPU before following this tutorial.

To only update the hardware, you’ll need:

If you want to update the toolchain, you’ll need:

Bonus Clock Improvement: One additional thing I did is replace the 74LS04 inverter in Ben’s clock circuit with a 74LS14 inverting Schmitt trigger (datasheet, Jameco). The pinouts are identical! Just drop it in, wire the existing lines, and then run the clock output through it twice (since it’s inverting) to get a squeaky clean clock signal. Useful if you want to go even faster with the CPU.

Step 1: Program with an Arduino and Assembler

There’s a certain delight in the physical programming of a computer with switches. This is how Bill Gates and Paul Allen famously programmed the Altair 8800 and started Microsoft. But at some point, the hardware becomes limited by how effectively you can input the software. After upgrading the RAM, I quickly felt constrained by how long it took to program everything.

You can continue to program the computer physically if you want and even after upgrading that option is still available, so this step is optional. There’s probably many ways to approach the programming, but this way felt simple and in the spirit of the build. We’ll use an Arduino Mega 2560, like the one in Ben’s 6502 build, to program the RAM. We’ll start with a homemade assembler then switch to something more robust.

The first thing to do is prepare the CPU to be programmed by the Arduino. We already did the hard work on this in the RAM upgrade tutorial by using the bus to write to the RAM and disconnecting the control ROM while in program mode. Now we just need to route the appropriate lines to a convenient spot on the board to plug the Arduino into.

So now you have one convenient spot with 8 address lines, 8 data lines, and a write line. If you want to get fancy, you can wire them into some kind of connector, but I found that ribbon jumper cables work nicely and keep things tidy.

The way we’ll program the RAM is to enter program mode and set all the DIP switches to the high position (e.g., 11111111). Since the switches are upside-down, this means they’ll all be disconnected and not driving to ground. The address and write lines will simply be floating and the data lines will be weakly pulled up by 1k resistors. Either way, the Arduino can now drive the signals going into the chips using its outputs.

Now that we can interface with an Arduino, we need to write some software. If you follow Ben’s 6502 video, you’ll have all the knowledge you need to get this working. If you want some hints and code, see below (source code):

With this setup, you can now load multi-line programs in a fraction of a second! This can really come in handy with debugging by stress testing your CPU with software. Make sure to test your setup with existing programs you know run reliably. Now that you have your basic setup working, you can add 8 additional lines to read the bus and expand the program to let you read memory locations or even monitor the running of your CPU. 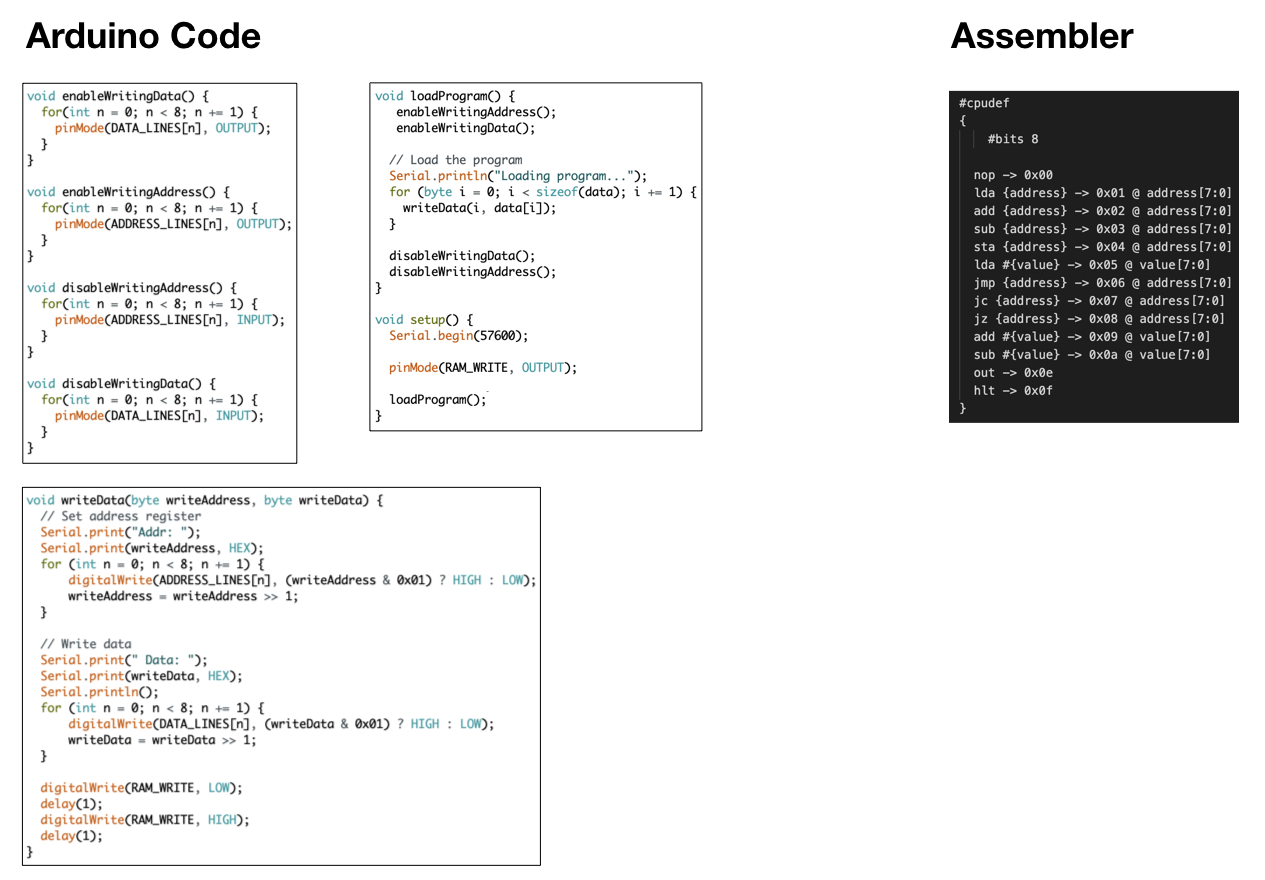 The above will serve us well but it’s missing a key feature: labels. Labels are invaluable in assembly because they’re so versatile. Jumps, subroutines, variables all use labels. The problem is that labels require parsing. Parsing is a fun project on the road to a compiler but not something I wanted to delve into right now–if you’re interested, you can learn about Flex and Bison. Instead, I found a custom assembler that lets you define your CPU’s instruction set and it’ll do everything else for you. Let’s get it setup:

At this stage, you can start creating some pretty complex programs with ease. I would definitely play around with writing some larger programs. I actually found a bug in my hardware that was hidden for a while because my programs were never very complex!

Before we can expand the CPU any further, we have to address the fact we’re running out of control lines. An easy way to do this is to add a 3rd 28C16 ROM and be on your way. If you want something a little more involved but satisfying, read on.

Right now the control lines are one hot encoded. This means that if you have 4 lines, you can encode 4 states. But we know that a 4-bit binary number can encode 16 states. We’ll use this principle via 74LS138 decoders, just like Ben used for the step counter.

If your build is anything like mine, the control lines are a bit of a mess. You’ll need to be careful when rewiring to ensure it all comes back together correctly. Let’s get to it:

At this point, you really need to ensure that the massive rewiring job was successful. Connect 3 jumper wires to A0-A2 and test all the combinations manually. Make sure the correct LED lights up and check with a multimeter/oscilloscope that you’re getting the right signal at each chip. Catching mistakes at this point will save you a lot of headaches! Now that everything is working, let’s finish up:

Expanding the control lines required physically rewiring a lot of critical stuff, so small mistakes can creep up and make mysterious errors down the road. Write a program that activates each control line at least once and make sure it works properly! With your assembler and Arduino programmer, this should be trivial.

With the additional control lines, don’t forget you can now add a BO signal easily which lets you fully use the B register.

Adding a stack significantly expands the capability of the CPU. It enables subroutines, recursion, and handling interrupts (with some additional logic). We’ll create our stack with an 8-bit stack pointer hard-coded from $0100 to $01FF, just like the 6502.

Wiring up the Stack Pointer

We’ve now connected everything but the Count Up and Count Down inputs. The way the 74LS193 works is that if nothing is counting, both inputs are high. If you want to increment, you keep Count Down high and pulse Count Up. To decrement, you do the opposite. We’ll use a 74LS00 NAND gate for this:

At this point, everything should be working. Your counter should be able to reset, input a value, output a value, and increment/decrement. But the issue is it’ll be writing to $0000 to $00FF in the RAM! Let’s fix that.

We need the stack to be in a different place in memory than our regular program. The problem is, we only have an 8-bit bus, so how do we tell the RAM we want a higher address? We’ll use a special control line to do this:

That’s it! Now, whenever we need the stack we can use a combination of the control line and stack pointer to access $0100 to $01FF.

All that’s left now is to create some instructions that utilize the stack. We’ll need to settle some conventions before we begin:

If you want to add a little personal flair to your design, you can change the convention fairly easily. Let’s implement push and pop (source code):

And that’s it! Write some programs that take advantage of your new 256 byte stack to make sure everything works as expected.

The last step to complete our stack is to add subroutine instructions. This allows us to write complex programs and paves the way for things like interrupt handling.

We’ll follow 6502 conventions and only save and restore the program counter for subroutines. Other CPUs may choose to save more state, but it’s generally left up to the programmer to ensure they’re not wiping out states in their subroutines (e.g., push the A register at the start of your subroutine if you’re messing with it and restore it before you leave).

I’ve started running low on opcodes at this point. Luckily, we still have two free address lines we can use. To enable 5-bit opcodes, simply wire up the 4Q output of your upper 74LS173 register to A7 of your 28C16 ROM (this assumes your opcodes are at A3-A6).

At this point, you simply need to update the Arduino writer to support 32 instructions vs. the current 16. So, for example, UCODE_TEMPLATE[16][8] becomes UCODE_TEMPLATE[32][8] and you fill in the 16 new array elements with nop. The problem is that the Arduino only has so much memory and with the way Ben’s code is written to support conditional jumps, it starts to get tight.

I bet the code can be re-written to handle this, but I had a TL866II Plus EEPROM programmer handy from the 6502 build and I felt it would be easier to start using that instead. Converting to a regular C program is really simple (source code):

Running your program will spit out two binary files with the full contents of each ROM. Writing the file via the TL866II Plus requires minipro and the following command: minipro -p CAT28C16A -w rom_upper.hex.

At this point, I cleaned up my instruction set layout a bit. I made psh and pop 1000 and 1001, respectively. I then created two new instructions: jsr and rts. These allow us to jump to a subroutine and returns from a subroutine. They’re relatively simple:

Once you update the ROM, you should have fully functioning subroutines with 5-bit opcodes. One great way to test them is to create a recursive program to calculate something–just don’t go too deep or you’ll end up with a stack overflow!

And that’s it! Another successful upgrade of your 8-bit CPU. You now have a very capable machine and toolchain. At this point I would have a bunch of fun with the software aspects. In terms of hardware, there’s a number of ways to go from here: